Migration from Latin America and the Caribbean: Drivers and Policy Responses 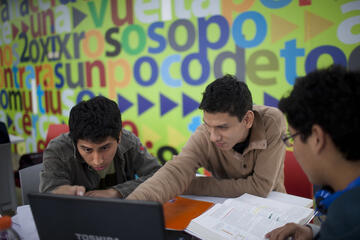 The drivers of Migration from Latin America and the Caribbean region are no different than those in the other regions. Or are they? What are the root causes and fundamental drivers of migration: poverty, lack of jobs, search for better jobs, violence, political conflict, and/or climate change? What are the links between migration and development? What roles can the governments of sending countries and host countries play in promoting safe and regular migration? What roles can international organizations play? Can diasporas be leveraged to address the drivers of migration? These were some of the questions addressed by eminent panelists in this session.

To watch the video of the session, please click here.

Michal Rutkowski is the Global Director for Social Protection and Jobs – overseeing the World Bank’s work in developing systems that protect the poorest and vulnerable from crises and shocks, and supporting private sector-led growth. Until July 2016, he was the Director for Multilateral Organizations, and prior to that the Country Director for the Russian Federation and the Resident Representative in Moscow for three years. Mr. Rutkowski joined the World Bank in 1990. He was a country economist for the Russian Federation between 1995-1996, and after taking a brief leave from the Bank, returned as Sector Manager for social protection between 1998-2004, where he led a team of professionals working on pensions, labor market and social assistance reforms in 28 countries of Central and Eastern Europe and former Soviet Union, as well as in Turkey. Mr. Rutkowski’s published work covers issues on labor markets and social security. He was a core team member of the World Development Report “Workers in an Integrated World”- the World Bank’s annual flagship research publication - in 1995.

Since November 2020, Mr. Jaime Roberto Diaz Palacios is serving as Executive Vice President of the Central American Bank for Economic Integration (CABEI). He has a solid professional career with more than 15 years in the field of Economics and Finance for Development, holding the positions of Executive Director of the National Competitiveness Program (Pronacom) and Economist at the Center for National Economic Research in the Republic of Guatemala (2012 - 2015). He most recently served as Senior Advisor to the Executive Director of World Bank (2015 - 2019).

Eric Jacobstein is a senior advisor in the Bureau for Latin America and the Caribbean at USAID. Prior to that role, he was a senior policy advisor on the House Committee on Foreign Affairs managing the Western Hemisphere portfolio for Chairman Eliot Engel and Committee Democrats. In this role, he was the lead Democratic advisor handling issues related to Latin America and the Caribbean in the House of Representatives. Jacobstein previously served as the staff director of the Senate Caucus on International Narcotics Control working for Senator Dianne Feinstein. Before that, he worked for the House Subcommittee on the Western Hemisphere and for Representative Jim Kolbe.

Taimur Samad is a Program Leader for Sustainable Development and Infrastructure for The World Bank in Colombia and Venezuela Office. He joined the Bank as a Consultant in 2001 working in the transport and Urban development unit. His most recent position has been as Program leader for sustainable development in Jakarta Country office, previously he coordinated the Urban program in Indonesia Office, leading complex multisector loan- and advisory projects. He has an extensive experience in Latin America and the Caribbean Region (LCR), even as a project leader in Colombia for about five years.

Dilip Ratha is the head of KNOMAD and lead economist, Migration and Remittances, Social Protection and Jobs Global Practice at the World Bank. In a career spanning three decades, he has done pioneering work on remittances, migration, and innovative financing (diaspora bonds, future-flow securitization, shadow sovereign ratings). His TED talk, with over 1.4 million views, has inspired many fintech start-ups. He is the Founder of KNOMAD, Migrating out of Poverty Research Program Consortium, and African Institute of Remittances. He has a Ph.D. in economics from Indian Statistical Institute.