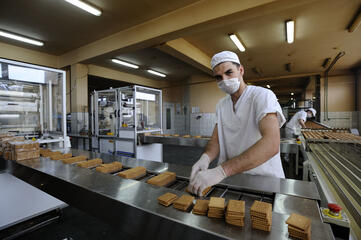 The session marked the launch of a new World Bank/KNOMAD report “Recovery: COVID-19 Crisis through a Migration Lens.” The panelists discussed the impact of COVID-19 in 2021 on remittances, migration flows, and policy responses. The discussants also shared their suggestions for leveraging migration and remittances as part of the global recovery and beyond.

Michal Rutkowski is the Global Director for Social Protection and Jobs – overseeing the World Bank Global Practice responsible for protecting poor and vulnerable from shocks through improving their job opportunities, earning capacity, and social insurance and social assistance (safety net) coverage. Until July 2016, he was the Director for Multilateral Organizations, and prior to that the Country Director for the Russian Federation and the Resident Representative in Moscow for three years.   In the period 2004-12, he was Sector Director for Human Development in the Middle East and North Africa and then South Asia regions of the World Bank. Before 1996, after a brief period of work on Africa and China, Mr. Rutkowski worked extensively on social insurance and labor market issues in transition economies and as a country economist for Russia and after taking a leave from the Bank, returned as Sector Manager for social protection between 1998-2004, where he led a team of professionals working on pensions, labor market and social assistance reforms in 28 countries of Central and Eastern Europe and former Soviet Union, as well as in Turkey. During his leave from the World Bank in the period 1996-98 he helped design and implement the new Polish pension system while serving as the Director of the Office for Social Security Reform.  He also taught at the Institute of Economic Policy at the Warsaw School of Economics. Mr. Rutkowski’s published work covers among others, issues on labor markets and social security. He was a core team member of the 2015 World Development Report “Workers in an Integrated World”- the World Bank’s annual flagship research publication. Mr. Rutkowski holds an M.Sc. and Ph.D from Warsaw School of Economics and finished his post-graduate studies at the London School of Economics. He also graduated from the Executive Development program at the Harvard Business School in 1999, and from the Leadership for Collective Intelligence program run by Dialogos in 2010.

Dilip Ratha is head of KNOMAD and lead economist, Migration and Remittances Team, at the World Bank. He is a thought leader on migration, remittances, and innovative financing for development, including diaspora bonds, future-flow securitization, and shadow sovereign credit ratings. His TED Talk “The hidden force in global economics: sending money home” has 1.4 million views.

Mr. Abdirahman M. Abdullahi is the Governor of the Central Bank of Somalia (CBS). He has over 20 years of professional experience in the aspects of Financial Management. He started his career working with the Finance Ministry of Somalia in 1986, but he worked most part of his adult life in the Private sector in Norway and the UK. Abdi’s compassion for aid and development issues has taken him to work in a number of charity organizations operating in Yemen and the Horn of Africa. He was appointed as a Governor of CBS in April 2019. Prior to his current role as Governor of CBS, Abdi has worked as Senior Economic Policy Advisor for the Office of the Prime Minister in Somalia, where he contributed significant policy reforms in the areas of Public Financial Management.

Abdi holds a Master’s degree in Finance and International Banking (MSc) from Liverpool John Moores University (JMU) in the U.K and a Bachelor’s degree in Business Administration from Norwegian University of Technology and Science (NTNU).