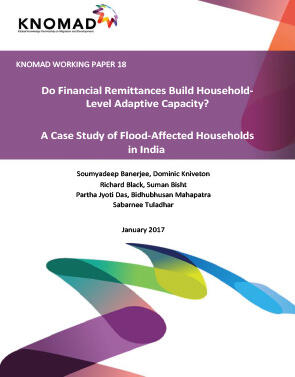 The impacts of climate change are likely to be felt most by those countries already facing the development challenges of widespread poverty and poor governance (McCarthy et al. 2001). Although some progress has been made toward ameliorating the causes of climate change, namely, agreements for reducing greenhouse gas emissions, there remains a pressing need for countries and their peoples to build their ability to adapt to the impacts of future climate change. Many adaptations by individuals, households, and communities are likely to occur where the impacts of climate change are felt. However, it has been suggested that as an alternative to in situ adaptation and as the limits of in situ adaptation are reached, migration for work is an option in households’ adaptation portfolios. Temporary and seasonal migration enables people to stay in their rural homes over the longer term when faced with shorter-term environmental challenges (Tacoli 2009). Financial remittances sent back by migrant workers contribute to the welfare of the household in origin communities and support their sustenance during climate shocks and stresses (Stark and Levhari 1982; Yang and Choi 2007). Financial remittance inflows are more stable than other forms of private capital flows, particularly during crisis (Ratha 2003; Kapur 2004; De et al. 2016). Apart from financial remittances, migrants facilitate the circulation of ideas, practices, and identities between destination and origin communities (Levitt 2001). In a study in Thailand, Sakdapolrak (2014) finds that returning migrants introduced ideas about new local businesses (for example, Internet cafes), or crucially influenced the introduction of new innovative agricultural practices. Indeed, migration forms one of a number of livelihood strategies already chosen by individuals and households in response to other transformative pressures and opportunities (for example, higher wage potential in urban areas, perception of relative deprivation, and improved access to communication and transportation infrastructure) even without the impacts of climate change.