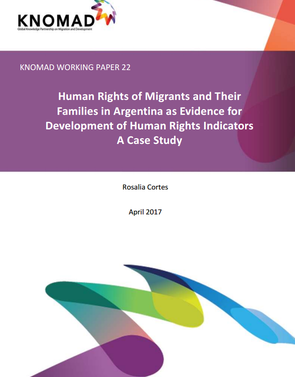 Human Rights of Migrants and Their Families in Argentina as Evidence for Development of Human Rights Indicators: A Case Study

Argentina’s restrictive migration law enacted in 1981 under military rule remained applicable until 2004; until its demise, migratory controls were strict, and irregular migrants were prone to detention and deportation. Undocumented migrants had limited access to health and education and were not allowed to engage in employment or commercial transactions. This report analyzes continuities and changes in migrant adults’ and children’s access to their social and economic rights in Argentina since changes in the regulation of migration initiated in 2004 were implemented. The new regulations smoothed the difficulties faced in the process of regularization. Mercosur and associated countries’ nationals were able to apply for temporary two-year residence without the prerequisite of holding a job or having family in the country. With regard to the three indicators of decent work available for comparison between migrants and natives—employment population ratio, unemployment rate, and informal (unregistered) employment— this report concludes that regularization facilitated the incorporation of migrant men and women into decent employment. In previous periods the rate of economic participation and employment of men and women migrants was higher than that of natives, and unemployment rates were lower; the main change fostered by the law was increased access to registered work. In construction and in household help the incidence of unregistered work dropped more among migrants than among natives. This is an important change, given that health care insurance, the provision of family allowances, and access to the public retirement scheme are dependent on work status.