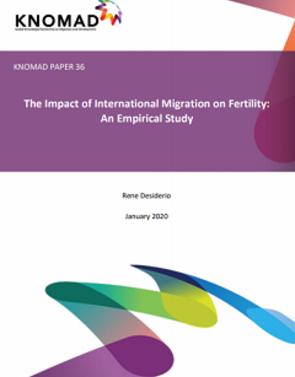 The Impact of International Migration on Fertility: An Empirical Study

This paper focuses on how migration affects fertility in countries of origin and destination through the dissemination of values and information as well as through decisions to postpone the birth of children before departure. The heterogeneity in the fertility of women from various migrant groups is underlined in most studies, many of which indicate that the total fertility rates of migrants originating from high-fertility countries exceed the average in destination countries. While the various mechanisms underlying migrant fertility patterns and convergence have been examined, much less attention has been paid to the diffusion of host-country fertility norms across sending countries by emigrants and returnees. The prospect that immigrant inflows can save low-fertility receiving countries from population aging and decline has, in recent years, become increasingly attractive. Proponents argue for the rejuvenating effect of sustained entries of young migrants in preserving overall population size, the size of the workforce, and the age structure of the population. However, while immigration usually reduces the average age of the host populations, it cannot reverse population aging except through very high and exponentially increasing inflows. The demographic changes occurring in the developing world, particularly the declining birth rates in sending countries, will generate a new dynamic. A new generation of migrants with no spouses or children in the home country will have different motivations than did earlier generations of migrants, for whom sending remittances to a family left behind was a prime consideration, followed – in some cases – by family reunification.