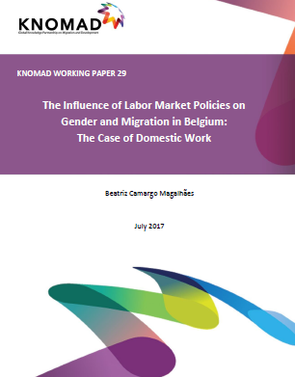 The Influence of Labor Market Policies on Gender and Migration in Belgium: The Case of Domestic Work

Domestic work in Western Europe is mainly provided by migrant women. In 2010, Belgium had 202,800 people working as domestic and related helpers, cleaners, and launderers in the formal market, of which 73.2 percent were women and a majority were foreign born (both non-Belgians and migrants who acquired Belgian nationality). These figures do not include domestic workers in the informal sector, mostly composed of undocumented immigrants. In this context, labor market policies lead to specific outcomes with regard to migration and gender in the Belgian domestic work sector. For instance, domestic work is not among the occupations that provide eligibility for a labor migration visa, and workers cannot regularize their migratory situation on the basis of domestic employment. Moreover, work permits link the residence permit to the worker’s contract, increasing their dependency on the employer. These restrictions interplay with other policy measures such as free circulation of EU workers, migration regulations regarding newer member states, and free circulation of services. These policy intersections primarily affect migrant women because they are overrepresented in the domestic work—still considered low skilled and feminine. Women are then differently affected by the structure of opportunities and constraints resulting from policies and context, according to their migratory status. The analysis focuses on the Belgian domestic work market but can be generalized for other countries. The article suggests several recommendations linked to the policy analysis that would increase protection of migrant domestic workers, such as withdrawing migration-control functions from social inspectors. On the migration policy sphere, modifying the current work permit system and ensuring paths to regularization of undocumented migrants could certainly contribute to lessen labor exploitation in the sector.