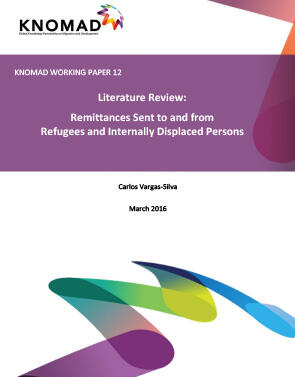 Remittances Sent to and from Refugees and Internally Displaced Persons: A Literature Review

This document reviews the evidence on remittances in the context of forced displacement. The evidence suggests that remittances are often affected, and affected more strongly, by factors in the displacement context that are different from factors in other contexts, such as economic migration. These factors include the possibility of continuing or new conflicts in the region or country of origin, the possibility of sudden mass repatriations, the relationship of diaspora groups with the region or country of origin and opposition groups, the higher risk of sudden closure of remittances channels, and the complex movement trajectories of the displaced, among others. Much is still unknown about remittances sent to and from the displaced, and the existing literature is limited. The evidence is largely based on qualitative research focused on refugees and concentrates on a few cases. Taking these issues into consideration, future research efforts should particularly focus on providing more insights into internally displaced persons in underresearched cases and should consider the inclusion of a strong quantitative component.